Andrew Rosindell said he was "deeply concerned" after reading a story in the Sunday Express that the statue of Ronald Reagan in Grosvenor Square...
More
wallnews.md
More
Home WORLD NEWS
December 12, 2020

Boxing: Inside Wembley Arena ahead of Joshua v Pulev

Bakole vs Kuzmin – Round Five

Blimey. These two are going to be dead on their feet by the end of the fight. Kuzmin is giving it everything, landing some flush shots but Bakole came back well, working the body towards the end of the round.

Bakole vs Kuzmin – Round Four

Not the best round of the fight but Kuzmin is growing into the fight. Billy Nelson is on Bakole’s case here to keep up the work rate.

ANTHONY JOSHUA IS IN THE BUILDING

Away from the action, Joshua has arrived at the SSE Arena. His team have now placed towels over the cameras in his dressing room, sadly.

Bakole vs Kuzmin – Round Three

Bakole conserves energy but gets another round in the bag.

Bakole vs Kuzmin – Round Two

Bombs away. Bakole is the aggressor and unleashes several left hooks to the body. He has run out of steam towards the end of the round. Kuzmin comes back fighting after absorbing at least ten punches in the first 90 seconds of Round Two. Very even this.

Bakole vs Kuzmin – Round One

Good opening round from Bakole, who was caught by a nice right hand from Kuzmin. This is already shaping up to be an interesting contest.

UP NEXT: Martin Bakole vs Sergey Kuzmin

This one should be a cracker. Both fighters have just one career defeat, which came at the hands of the dangerous Michael Hunter.

Kuzmin beat Joe Joyce in the amateurs and won a gold medal at the European Championships.

Won’t be betting on this one but if I was, Bakole by knockout.

Must win for both fighters, if they’re serious about earning a world title shot in the future.

No surprises there. Conway cruises to a unanimous points victory over his opponent but he should have got the stoppage there. Seemed cautious to go all out for the finish but job done either way.

Carl Froch wants to see the rematch with Ted Cheeseman before he takes on somebody like Anthony Fowler.

Conway vs McGowan – Round 10

Clear Conway wanted to close the show here. He went looking for the stoppage and emptied the tank in Round 10 but didn’t quite get it. Credit to McGowan for hanging in there but you have to ask whether it was worth it. He was pulverised in the second half of the fight.

Conway vs McGowan – Round 9

McGowan is taking further punishment here, with just one round left to go. He’s just asked about the football score again in the corner. He didn’t miss much, as Manchester United drew 0-0 with City at Old Trafford.

Conway vs McGowan – Round 8

KNOCKDOWN! Conway sends McGowan tumbling to the canvas with a lovely combination. The Mancunian is getting busted up in there but still, he finds the desire to dig deep. Hard to see this one going the distance, surely Gary Booth considers pulling him out.

Conway vs McGowan – Round 7

The referee tells McGowan to watch his head at the end of the round. Another comfortable round for Conway, who is enjoying himself out there.

Conway vs McGowan – Round 6

Conway vs McGowan – Round 5

Halfway here. Best round of the evening for McGowan, who is battling on.

Conway has landed some slick shots but he remains the dictator of this fight and has the centre of the ring.

It’s a bright start from Conway, who has already drawn blood from the nose of McGowan.

Despite that, the Mancunian was even asking his trainer for updates from the Manchester derby in between rounds.

He’s a right character McGowan and caused a stir on Thursday night when he clashed with Florian Marku in the hotel corridors at the Hilton Wembley.

After calling Marku “a little midget”, he was urged to say it to the Albanian’s face.

Security were forced to intervene outside Marku’s hotel room.

Albanian star Florian Marku is incensed here after the ref scored his bout with Jamie Stewart a 76-76 draw.

There’s no doubt about it, Marku well within his rights to feel hard done by.

Marku said: “Does this judge know boxing? I was only punched once clean.

“They are ruining my career. How can they score this a draw?

“He only hit me clean in the head one time. Does this judge even know boxing?”

Stewart then hit back, by defending his corner: “He caught me with a clean shot to the body but it was all in short bursts.

“He did the pressuring and I did the boxing.”

Tyson Fury turned down the chance to be ringside for tonight’s contest, ahead of a potential undisputed fight.

Adam Smith, Head of Sky Sports Boxing, invited the Gypsy King to be part of their coverage from the Wembley Arena but Fury announced earlier this week on social media that he wouldn’t be coming.

He said: “This is Tyson Fury, the Gypsy King. Just a quick one guys, I will not be attending any boxing this weekend.

“For all the rumours this weekend that I’ll be attending some boxing, I will not be.

“Don’t expect fireworks, don’t expect any action from the Gypsy King because I’ll be grafting, I’ll be working as usual, always staying fit and ready. Good night and god bless.”

Top Rank chief Bob Arum is backing his fighter Kubrat Pulev to cause a major upset and he even thinks the Bulgarian can knock Anthony Joshua out.

Arum packed no punches when making his prediction and warned Eddie Hearn earlier this week that anything could happen.

“It’s one thing to box and run around the ring, making out you’re second coming of Muhammad Ali when you’re fighting a fat, obese Andy Ruiz,” Arum said.

“But it’s going to be a different story when you’re fighting a fit and ready Pulev, who’s in great shape and a good boxer.

“I believe Kubrat will be able to match Joshua with boxing ability and will have an opportunity to catch Joshua and knock him out.

“Pulev is very strong and has good pedigree, so Joshua won’t be able to run and do what he did to Ruiz in the rematch.”

Who is in undercard action tonight?

As mentioned, it’s a stacked card at the SSE Arena tonight and there is plenty to feast on besides the main event.

Lawrence Okolie takes on Nikodem Jezewski as he looks to vent some frustration after his WBO cruiserweight world title fight with Krzysztof Glowacki was cancelled.

Plans to face Glowacki have been shelved, as opposed to postponed after the 34-year-old tested positive for coronavirus during his training camp.

There will be fireworks when Congolese heavyweight Martin Bakole takes on Sergey Kuzmin and many feel this fight could end in devastating fashion.

Both fighters have lost just once in their professional careers and both defeats were inflicted by former Matchroom star Michael Hunter. 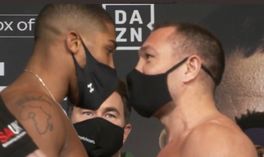 We’ll be keeping you up to date on all the action from the SSE Arena, Wembley where the fighters will make their way to the ring between 10-10:30pm.

The two heavyweights were initially set to collide back in 2017 in Cardiff before Pulev was forced to pull out of the fight through injury.

It was finally penciled in again earlier this year though on July 20 at the Tottenham Hotspur Stadium before the coronavirus pandemic eventually saw the contest rescheduled for December.

AJ will be looking to issue an emphatic statement to Tyson Fury ahead of next year’s potential undisputed clash with the Gypsy King.

Russia stands up to Putin: Thousands ignore threats and protest in support of Navalny

Russia stands up to Putin: Thousands ignore threats and protest in support of NavalnyProtests erupted across the country today in support of Putin's jailed...
Read more
WORLD NEWS

Eurozone haunted by 'ghost bankruptcies' as 200,000 firms at risk – alarm bells ringHundreds of billions of euros have been spent on support measures...
Read more
WORLD NEWS

South China Sea: Taiwan to 'buy missiles' from US as Beijing increases threats

An Early Promise Broken: Inside Biden’s Reversal on Refugees